Our understanding of voter turnout in Saskatchewan has to change

The following opinion/editorial was provided by Dr. Boda to the Leader-Post, StarPhoenix and CBC Saskatchewan on March 27, 2016.

In recent years, a less-than accurate, perhaps even fictitious narrative has emerged about voter turnout at Saskatchewan’s provincial elections.  It’s a kind of feel-good story about how at least two-thirds of the electorate will always show up to vote.  Indeed, there is a certain pride associated with the prevailing tale, often when we want to compare ourselves against other western provinces.

The real story isn’t quite as idyllic.  In fact, the number of people voting in provincial elections has been dropping consistently for the past 30 years.  And despite an ‘official’ turnout figure of 67 percent of registered voters during Saskatchewan’s 2011 election, only 51 percent of voters eligible to vote actually did.

There is good reason why our mind’s eye understanding of voter turnout is likely to be challenged on April 4 and in the months ahead as official turnout figures become available.  It has to do with recent changes to a process that is central to the way we vote in Saskatchewan—voter registration.

Registration is necessary to verify that a person meets basic requirements to be a voter, including citizenship, age and residency.  Every person who wants to vote has to be registered before a ballot can be issued to them.

In Peace, Progress and Prosperity, Gordon Barnhart tells us that since the 1912 provincial election that Chief Electoral Officers have engaged thousands of people to enumerate voters across the province.  In 2011, 77 percent of Saskatchewan’s eligible voters were registered and placed on the voters list using this method.

Changes in 2014 to Saskatchewan’s Election Act have allowed Elections Saskatchewan to institute improved registration methods which will, ultimately, include a permanent register of voters to house data on an ongoing basis. Even before voting begins for the 2016 provincial election, these new methods have already led to more than 92 percent of eligible voters being registered while reducing costs in the long run.

The increase in the percentage of eligible voters being registered will almost certainly have an impact on how voter turnout is understood on April 4.  Simply put, the denominator in the calculation of voter turnout is getting significantly larger because we have gotten much better at registering voters.

What impact could this have? Certainly, turnout could increase.  After all, the number of Saskatchewan voters increased by 21 percent during the 2015 federal election over the 2011 federal election.

But a very different story could also emerge.  Even if the number of people who vote remains exactly as it was for the 2011 provincial election, measuring that number against the now much higher number of those registered would result in turnout figure of about 54 percent.

This is more than just an interesting mathematical problem.  How we measure voter turnout matters.  It shapes our understanding of public participation in our democracy, our view of how citizens engage in their communities and the extent to which those elected are viewed as having a mandate to lead.

As we move toward a time of voting in Saskatchewan, it is important that we understand the level at which our citizens have participated in the 28th Provincial Election.  Without a meaningful understanding of the change in how voter turnout figures are generated, Saskatchewan’s voters could be shocked by turnout figures for the 2016 provincial election. 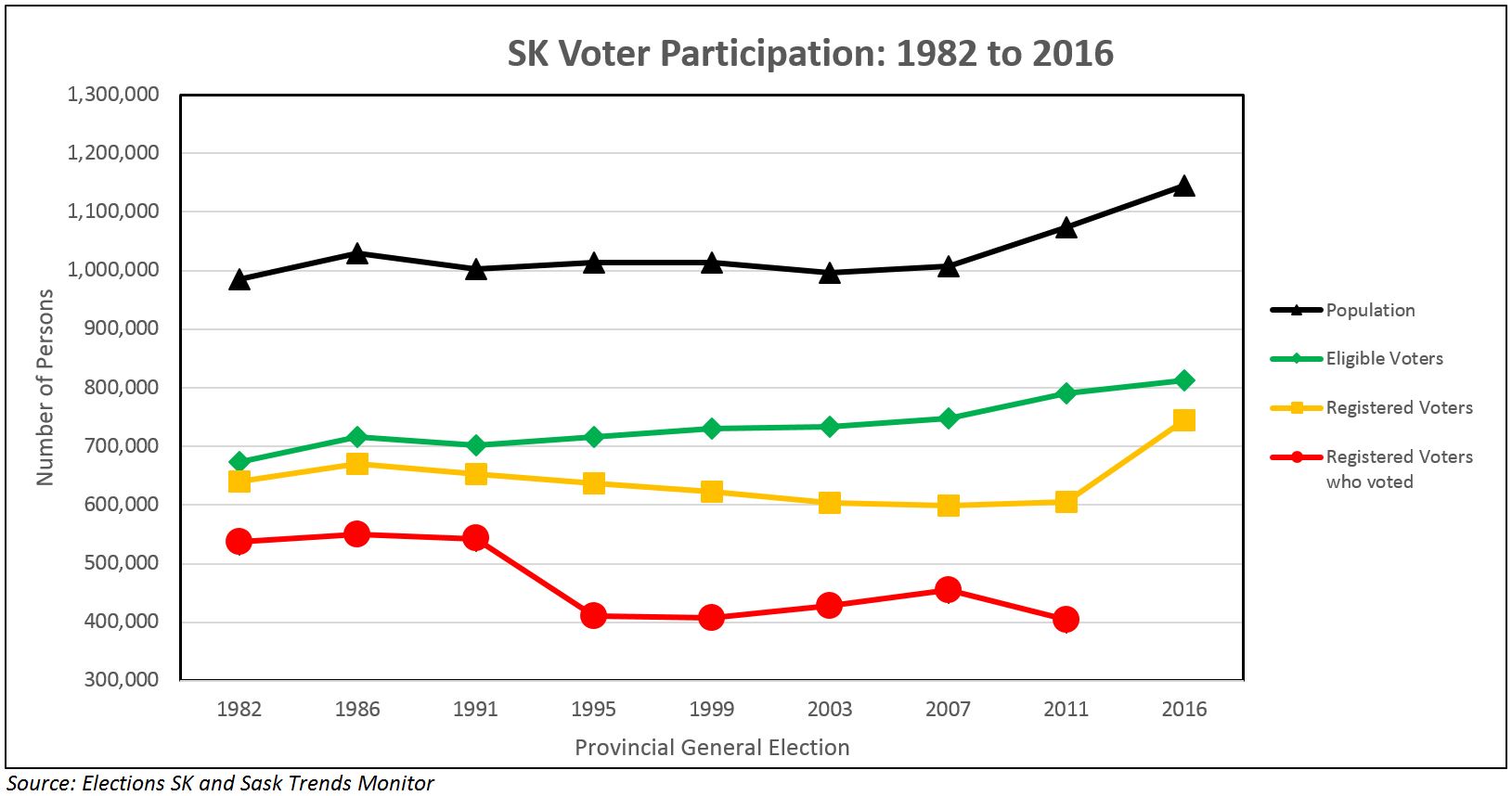 Michael Boda has been Chief Electoral Officer in Saskatchewan since 2012.  To learn more about voter turnout in provincial elections, go to elections.sk.ca/resource-centre.